Animal feed is food given to domestic animals in the course of animal husbandry. There are two basic types: fodder and forage. Used alone, the word feed more often refers to fodder.

"Fodder" refers particularly to foods or forages given to the animals (including plants cut and carried to them), rather than that which they forage for themselves. It includes hay, straw, silage, compressed and pelleted feeds, oils and mixed rations, and sprouted grains and legumes. Feed grains are the most important source of animal feed globally. The amount of grain used to produce the same unit of meat varies substantially. According to an estimate reported by the BBC in 2008, "Cows and sheep need 8 kg of grain for every 1 kg of meat they produce, pigs about 4 kg. The most efficient poultry units need a mere 1.6 kg of feed to produce 1 kg of chicken."[2] Farmed fish can also be fed on grain and use even less than poultry. The two most important feed grains are maize and soybean, and the United States is by far the largest exporter of both, averaging about half of the global maize trade and 40% of the global soya trade in the years leading up the 2012 drought.[3] Other feed grains include wheat, oats, barley, and rice, among many others.

Traditional sources of animal feed include household food scraps and the byproducts of food processing industries such as milling and brewing. Material remaining from milling oil crops like peanuts, soy, and corn are important sources of fodder. Scraps fed to pigs are called slop, and those fed to chicken are called chicken scratch. Brewer's spent grain is a byproduct of beer making that is widely used as animal feed. 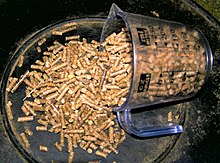 A pelleted ration designed for horses

Compound feed is fodder that is blended from various raw materials and additives. These blends are formulated according to the specific requirements of the target animal. They are manufactured by feed compounders as meal type, pellets or crumbles. The main ingredients used in commercially prepared feed are the feed grains, which include corn, soybeans, sorghum, oats, and barley.

Compound feed may also include premixes, which may also be sold separately. Premixes are composed of microingredients such as vitamins, minerals, chemical preservatives, antibiotics, fermentation products, and other ingredients that are purchased from premix companies, usually in sacked form, for blending into commercial rations. Because of the availability of these products, farmers who uses their own grain can formulate their own rations and be assured that their animals are getting the recommended levels of minerals and vitamins,[4] although they are still subject to the Veterinary Feed Directive.

According to the American Feed Industry Association, as much as $20 billion worth of feed ingredients are purchased each year. These products range from grain mixes to orange rinds and beet pulps. The feed industry is one of the most competitive businesses in the agricultural sector and is by far the largest purchaser of U.S. corn, feed grains, and soybean meal. Tens of thousands of farmers with feed mills on their own farms are able to compete with huge conglomerates with national distribution. Feed crops generated $23.2 billion in cash receipts on U.S. farms in 2001. At the same time, farmers spent a total of $24.5 billion on feed that year.

The beginning of industrial-scale production of animal feeds can be traced back to the late 19th century, around the time advances in human and animal nutrition were able to identify the benefits of a balanced diet and the importance of the role processing of certain raw materials played. Corn gluten feed was first manufactured in 1882, while leading world feed producer Purina Feeds was established in 1894 by William Hollington Danforth. Cargill, which was mainly dealing in grains from its beginnings in 1865, started to deal in feed at about 1884.[citation needed]

The feed industry expanded rapidly in the first quarter of the 20th century, with Purina expanding its operations into Canada, and opened its first feed mill in 1927 (which is still in operation). In 1928, the feed industry was revolutionized by the introduction of the first pelleted feeds – Purina Checkers.[citation needed] 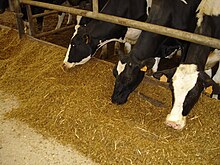 The US Animal Drug Availability Act 1996, passed during the Clinton era, was the first attempt in that country to regulate the use of medicated feed.

A herdsman from the Maasai people watches as his cattle graze in the Ngorongoro crater, Tanzania.

"Forage" is plant material (mainly plant leaves and stems) eaten by grazing livestock.[6] Historically, the term forage has meant only plants eaten by the animals directly as pasture, crop residue, or immature cereal crops, but it is also used more loosely to include similar plants cut for fodder and carried to the animals, especially as hay or silage.[7]

In agriculture today, the nutritional needs of farm animals are well understood and may be satisfied through natural forage and fodder alone, or augmented by direct supplementation of nutrients in concentrated, controlled form. The nutritional quality of feed is influenced not only by the nutrient content, but also by many other factors such as feed presentation, hygiene, digestibility, and effect on intestinal health.[8]

Feed additives provide a mechanism through which these nutrient deficiencies can be resolved effect the rate of growth of such animals and also their health and well-being. Even with all the benefits of higher-quality feed, most of a farm animal's diet still consists of grain-based ingredients because of the higher costs of quality feed.[8][9] The use of insects with certain nutrients such as Coelopa pilipes in animal feed has also been researched.

Giving Minerals and Supplements to Your Livestock